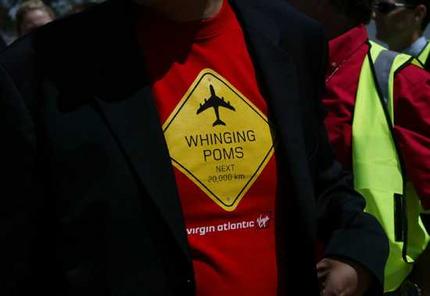 Another bit of etymology, but this time it’s what’s known as false, reverse, or folk-etymology. Listening to the otherwise excellent BBC Radio programme “The Long View” in the car recently (you can listen to it here or a few days), I heard an explanation of the well-known Australian/New Zealand insult “Pom” that rang a few bells, yet also set off the old BS detector. The programme was dealing with the topical issue of prison overcrowding both today and in the nineteenth century when people like the Quakers were working to reform the system. One of the contributors of the above programme is Dr Steve Hall, senior lecturer in Criminology at Northumbria University, who makes the following interesting claim;

“…Millbank Prison, which was basically a holding centre for prisoners waiting to be transported off to Australia. On the back of their standard issue prison jackets were the initials P.O.M. which was “Prisoners of Millbank”, and when they ended up in Australia, the Australians waiting at the other end would say “here’s another POM”. The presenter affirms this by repeating that “So the term “Poms” comes from this place; “Prisoners of Millbank”.

Sounds convincing, but almost a little too neat, too modern-sounding, too contrived, even leaving aside the rare capitalisation of the word “of”. Such markings would seem redundant in the context of transporting prisoiners – that such a group of men were convicts would have been known to those involved and self-evident to anyone else. And why would anyone need to know from which British prison the men had come? Identification of mid-19th Century prisoners seems to have been done instead (or I suppose, as well as) using badges, which would keep the institutionally provided clothing as recyclable and universal as you would expect:

It’s apparent from a little online research that this factoid is actually a variation of other, similar claims. Take “Prisoners Of Mother England” as mentioned on this Zimbabwe tourist site, or “Prisoner of Her Majesty” as listed here. You’ll note that the variants don’t specify a prison at all, let alone Millbank. If genuine, they would therefore be meaningful to a much wider audience. If you followed that last link, you might have spotted the word “backronym”, a neologism used to describe retrospectively devised acronyms. Often these are inventive but erroneous attempts to get to the bottom of a word’s etymology, as modern people are very familiar with the use of acronyms. A good example of this would be “Posh” – Port Out, Starboard Home. They can also be satirical in origin, but go on to be widely believed as fact, as with “Gentlemen Only Ladies Forbidden” for the word “golf”. In reality this first appears in Scots literature as “gouf“. The military are especially adept at tongue-in-cheek (and usually offensive) backronyms. These neologisms can even be a way of legitimising or playing down the usage of existing offensive words. Many will know of F.U.C.K., but I have personally witnessed a racist use of the word “Wog” rendered conversationally acceptable by the speaker’s protest/lie that it simply stands for “Worthy Oriental Gentleman”. Whatever the intent behind “POM(E/H)”, dubious acronyms like this have an air of being forced to fit. The other problem is that complex acronyms (beyond B.C., am etc) were scarce before the second half of the 20th Century (as discussed here). Many of these words can be shown to have earlier spellings (as with golf), or their own conventional etymologies, exposing the backronyms for what they are. This appears to be true of “Pom”.

You may have heard another common explanation of “pom” as being a contraction of “pomegranate”, and like me wondered why on earth Australians would equate either new convicts or later incomers with a type of fruit! Thankfully, the Oxford English Dictionary clears this up, explaining that it was a piece of rhyming slang (rather like the famous Cockney system) – Pome-granate – Immi-grant (as Harry Hill might put it). More convincing, I think you’ll agree. But why accept this explanation above the others? Well, it has what acronyms lack; evidence. The OED refers to a 14 November 1912 edition of Australian newspaper, The Bulletin, which includes the statement; “The other day a Pummy Grant (assisted immigrant) was handed a bridle and told to catch a horse.”

And that’s as close as we’re likely to get to the truth of the matter. Given this perfectly satisfactory explanation by a recognised authority, there’s no reason to believe in the “Prisoners of Millbank” backronym, not any of its variants. Of course, if Dr Hall or anyone else has some evidence for the claim, I’d be very pleased to eat my words!