Take a look at this Ebay auction for another of those “Vampire Killing Kits” I’ve written so much about. Before I write more of the same – why does this matter? Well, like all VKKs, this one is potentially worth a lot of money. It’s currently over $1000 without the reserve having been met. Similarly presentable kits have sold for thousands or even tens of thousands of dollars at auction. On the off-chance that the buyers of these things aren’t already fully aware of the spurious origin of the VKK, I offer this post.

This is quite a nice one, though bearing in mind the known facts surrounding these kits, the unequivocal date of 1835-45 seems a little over-confident. But hey, this is Ebay. 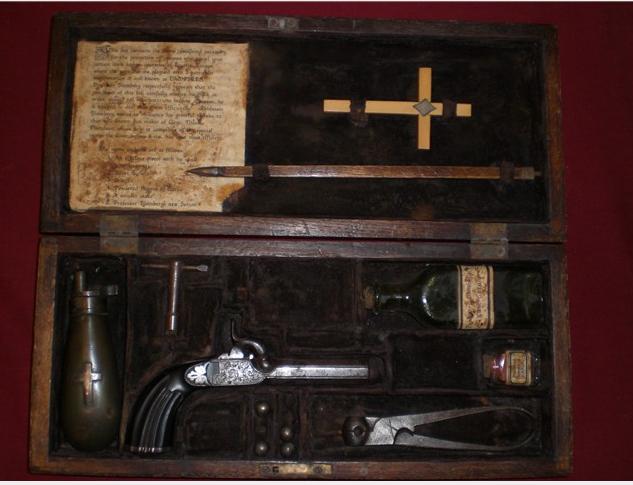 The kit is a “Blomberg”, complete with artificially aged contents-list, bottle of “serum”, and “efficient pistol” by the usual Belgian gunsmith, sold separately on Gunbroker.com due to Ebay’s fear of anything vaguely weapon-shaped.

So far, so typical. Here’s where it gets interesting. Have a look at the pistol, specifically the gunmaker’s name engraved under the barrel:

Those of you who know their VKKs ought to spot right away that the maker of this kit has managed to misspell the name “Nicolas Plomdeur” – an actual Liege pistol-maker – as “Nicolas Plomduer”. At least one other Blomberg kit has been observed with the misspelling “Plombeur”, which at least makes linguistic, if not historical, sense. But this “Plomduer” boob is a first, to my knowledge. It’s very unlikely indeed that a renowned gunsmith would allow a pistol to be sold with such a blatant error intact – reputations rely upon quality and consistency (and all this would take is a new barrel, not scrapping of the whole gun). So, perhaps a period copy aping Plomdeur’s work? Unlikely. For one thing the engraving is not very period-appropriate. It looks fresh and unworn. It is stamped rather than hand engraved – and lightly stamped at that. Examples of the real Nicholas Plomdeur’s work survive, and none of them resemble this mark. Finally, it’s marked on the underside flat of the barrel. Why? Gunmakers usually signed their work on the lock, sometimes on the top or side flat – never the underside. The point of applying the name was pride in one’s work and an early form of “brand-awareness”. It was a mark of quality – not to be hidden from view. As the barrel appears to be a “turn-off” type, it’s possible that it’s misaligned, but if so, the threads have been re-cut and the barrel shortened – suspect in itself if the case. So someone has applied this mark in the last few years (or decades at most) in a deliberate attempt to deceive.

For another thing, the “Blomberg” label is also misspelled in the same way. Therefore either the kit was made with the error on both items, or a subsequent owner has made a new contents list to match the pistol (the other way around being unlikely, as the case has apparently been made or re-made to fit this pistol. The current seller admits to having fabricated the powder flask, which looks no more or less aged than any other major component. It fits the case as well as any other component. In other words, the admittedly fake piece is indistinguishable from the supposedly genuine ones. This should sound a note of caution over the whole idea of these kits. Even if there are real ones out there, you’re going to need close examination and probably scientific testing to determine whether it might be “real”.

See how many other spelling and punctuation mistakes you can spot.
Prof. Blomberg may be fictional, but he’s usually more thorough than this…

As for the complimentary copy of “The Creature Vampyre”, it’s clearly modern, and not just in terms of its “binding”. It’s also entirely fictional, and doesn’t even use the same name as the guy supposedly responsible for putting these kits together (whose name is Ernst, not Charles). Whilst it doesn’t change the nature of the kit, it certainly doesn’t help its claim to authenticity any.

All of this points, in my view, to deliberate fraud. Maybe not by the current seller, but by whomever vandalised that percussion pistol and faked the contents list. As ever with these pieces – caveat emptor.