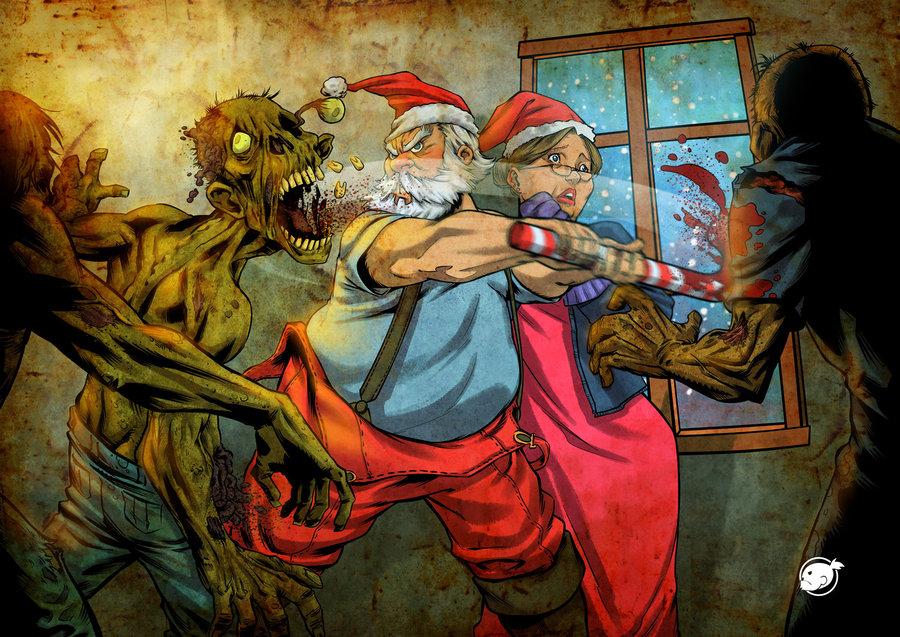 ‘Santa vs Zombies’ by Victor Negreiro

(Nothing to do with my title, which is a ‘Shaun of the Dead’ reference)

Why is Santa Claus’ tunic red? Because of Coca-Cola? S’Nope! To conceal the wounds he sustains in battle, of course! OK, perhaps not. But that explanation really has been offered on many an occasion to explain why the British ‘redcoat’ was so clad, especially in the US. A seamless seasonal link there, I think you’ll agree. The implication being that the British army that fought the American Revolution comprised thousands of scared impressed conscripts who would rout at the drop of a hat, were it not for the tyrannical discipline of their officers. Even the British have made this claim, probably because until relatively recently, soldiers were very much looked down upon in British society, such that a slight against their courage wouldn’t necessarily be a slight against the army or the Empire. Francis Grose, in his  ‘Military Antiquities’, states (though I can’t find the original source he cites online);

‘Julius Ferretus, a writer of the middle of the 16th century, in his Treatife on the Military Science, fays, that foldiers commonly wore a fhort red fagum, or frock, which colour was chofen that they might not be difcouraged by the fight of the blood from their wounds.’
-Grose, Military Antiquities, 1788 (p.6)

So this idea was a contemporary one. Nevertheless, it’s pretty dubious. Military uniforms were bold solid colours because for line infantry (riflemen and light infantry being a special case) there was no tactical need for anything that would blend in. It was also a bonus for officers and general staff to be able to see where their men were on the black powder-filled battlefield, and for the men themselves to be able to tell each other apart in close quarters. More significantly, in an age before chemical dyes, there was also quite a limited colour palette to choose from. Hiding your sucking chest wound had nothing to do with it. A fellow WordPress blogger has a good summary of why this claim is bogus. It points out that blood is in fact quite visible against red fabric, something I can vouch for having seen period uniform still bearing obvious blood stains. But I’m just as interested in where these things come from as debunking them. So where does this red herring originate? Well, it’s actually pretty ancient – 1st Century A.D. ancient, in fact:

‘They used to wear red tunics in battle to disguise and hide the blood from their wounds, not that the sight of the wounds would terrify them, but it might make the enemy a little more confident.’
-Valerius Maximus on the Spartans

Of course we have no way of knowing whether the Spartans really did this, but as another practical warfighting race, like the British later on, it seems pretty unlikely. The claim was recycled five hundred years later by an ecclesiastical scholar of the ancient world;

‘The reddened (russata) garment, which the Greeks call Phoenician and we call scarlet, was invented by the Lacedaemonians so as to conceal the blood with a similar color whenever someone was wounded in battle, lest their opponents’ spirits rise at the sight.’
-Isidore of Seville, Origines XIX, xxii, 10

Intriguingly, Isidore also says that Roman soldiers were known as russati because of the similarly red tunics that they wore; a direct foreshadowing of the British ‘redcoats’. I suspect our missing link here is a later writer, perhaps at the height of the British Empire in the Victorian period, deliberately drawing an analogy between the armies of the two empires, just as Valerius had by referencing the Spartans. The russati/redcoat connection would have reinforced this Britain=Rome meme, and might even have inspired the appropriation of the old Spartan/Roman myth. Now, this could be used by both proponents and enemies of a given country/empire, depending how it’s spun. Valerius and Isidore give a positive angle, but perhaps more logical is the negative version in currency by the 19th century, and presumably earlier:

‘English children are, perhaps, still taught that French soldiers wear red trousers in order that the sight of blood may not frighten them in war-time ; and doubtless French children imbibe a similar theory regarding the English red coats.’
-J.A. Farrer in ‘The Gentleman’s Magazine’, 1885**

Farrer’s summary is actually very comprehensive, although I couldn’t find the original source for this claim of his; ‘Lycurgus, the Spartan lawgiver…chose it, according to Xenophon, because red is most easily taken by cloth and most lasting;’ Which is a shame, because it would predate even Valerius (Xenophon being active c300 BC) Nevertheless, it’s still far closer to the truth than the blood thing, for which there is no evidence and no plausibility. After all, I can’t see this chap being overly worried about a spot of blood on his cloak, can you?