Skip to content
There’s an important difference between history and tradition. Both are ways of seeing and presenting our collective past, but tradition is not bound to comply with either objectivity or historical accuracy. Nowhere is this creative and imagination spin on the past more prevalent and important than in the annals of the world’s military forces. Tradition and history are both key binding elements that keep groups of otherwise diverse individuals together with a common purpose and sense of continuity. It can be very difficult to separate fact from fiction, especially once a particular meme has been written as regimental history. Tradition also helps soldiers deal with the difficult jobs they have to do; not least, killing other people and not being killed themselves. Fighting men like to be assured that they are both on the side of good, and more than capable of facing whatever hardships lie ahead. Because soldiers very often have more in common with their enemies individually and culturally than it might be healthy for them to admit, the bare bones of objective history won’t always do in the context of regimental and unit history. Which brings me to the subject at hand – nicknames. Specifically, the name “The Ladies From Hell” as applied to the kilted units of the British and Canadian armies in the First World War (another claim for the Canadians can be found here). Clearly this is meant to paint the men in question as something out of the ordinary; soldiers so tough that they can cross-dress and still be shining examples of fighting manhood. 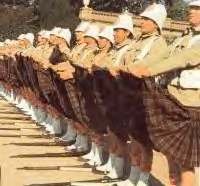 This traditional image, as a feature of the propaganda of Empire, was parodied in the irreverent film Carry On Up The Khyber, released just four years after the rather more “on message” Zulu. Given how rare the variant nickname “Devils in Skirts” is in the literature, I have a feeling (unconfirmed!) that it was the Carry On team who coined that version as a deliberate subversion of “Ladies from Hell”. In any case, today you will find both names in use to describe the Highland soldiers of the past. I say “the past” because the kilt made its last operational appearance at Dunkirk in 1940, though it continues to be worn with more formal uniform and in pipe bands as a symbol of identity, with all the connotations and gallant actions that this recalls. The Highland warrior, as reinvented in the early 18th Century by the British Army, is a truly iconic figure.

So where does this colourful nickname come from? The traditional story, which you can find all over the web, including the official British Army website, goes like this. German troops, respectful and even outright fearful of these strange and fearsome warriors, who paradoxically, by their cultural standard were also transvestites, coined the name as an expression of these feelings. The problem is that, as with other such names that are attributed to an awestruck enemy in or immediately after time of war, is that the historical sources are very one-sided. A German historian, Benjamin Ziemann, asserts that the Germans were no more or less afraid of kilted troops as any other Allied unit, and claims of some official list of “most capable” enemy forces are unfounded. This caused a bit of an indignant reaction from Scots, and they have a point in that Ziemann’s refutation does nothing to address the perceptions of individual German soldiers. So this leaves quite a gap for the “Ladies from Hell” to hide in. Ziemann himself admits that there was commentary upon kilted soldiers that expressed at least curiosity, if not any special measure of respect.

The biggest problem with the whole story is not the outright lack of evidence. There are many sources, and many of these are contemporary, right back to 1917, so this is no latter-day rewriting of history that we’re dealing with. Poems of the day use it, and an entire book (1918) uses the name for a title. Rather, it’s that all of the sources are what students of the urban myth would call “FOAF” or Friend of a Friend. They mostly refer to other Allied soldiers using the term, whereas what we would wish to see as quality (though still anecdotal) evidence, is a claim to have heard this from a captured enemy. Likewise I can find little reference from German sources of this term. There are brief mentions here and here, the latter actually a mocking reference to the skirt-like kilt. Perhaps after the fact, the Germans were understandably reluctant to admit to their respect for the “kilties”? This would be unusual though, because German memoir writers that have been translated into English are not backward about coming forward with such sentiments though. Especially a phrase as ambiguous and potentially ironic as “Ladies from Hell”. It needn’t be read as a compliment. In fact one theory says that it was originally a good old fashioned Anglo-Saxon piss-take, “reclaimed” by the Jocks when they heard about it. So why would German writers hide it? I should point out that John Gibbons’ “Soldier and Sailor Words and Phrases 1914-18” gives this explanation;

“..: Highland Regiments. Kilted troops. A name coined in the War by the German newspapers and adopted among the German troops on the Western Front.”

Some sources even claim that the nickname was official, something for which there is no corroborating evidence. “Private 12788” by John Jackson (a soldier’s memoirs of the Great War) that mentions the….

“…devil’s ladies, as the Kaiser himself had named us”.

However, I can find no further leads on either of these suggested German origins. If any German readers can point me to these sources, if indeed they exist, I would be very grateful. Meanwhile, and in the absence of testimony from PoWs, we have to ask how a private soldier would have known that this nickname had been bestowed. Something from the Allied press of the day perhaps? The alternative is that the name was an organic military myth, originating within the ranks. Whatever the case, the idea was propagated by these men during and after the war, but attributed to their enemy.

So is this just a piece of Allied propaganda? History being written by the victors? There is evidence that, like other unit nicknames, it may well have begun as such. But the culprits are not the armed forces. Then, even more so than today, civilian and soldier alike had limited access to news from the front. For all but the most senior officer and politician, it came from the media; the newspapers. A lack of concrete information, due to censorship and lack of sensational stories, led to some creative licence increasingly being taken, especially where it gave readers what they wanted – made them feel that the war was being won. Military commanders were of course quite happy for this mild form of propaganda to be put out. This was especially true of the American media, whose civilian audience were even more removed from the reality of war than Britons.

And so, two of the earliest references to the “Ladies From Hell” actually comes from an American newspaper – the New York Times, which refers to a visit by the pipe bands of Canadian contingents of the Gordon Highlanders:

“..it will be New York’s first glimpse of a really numerous body of Highlanders in uniform, who have earned from the Germans the nickname of “the ladies of hell”.

And from the edition of the following day..

“The Germans already know what they look like, and they call them ‘the ladies of hell'”.

This is significant because the first (or at least, most definitive) appearance of another contemporary military nickname, that of “Devil Dogs” to describe the US Marines, was also in the New York Times (see here). Direct reference is made to the Highlanders;

“Gee, those guys rank us with the ‘ Ladies from Hell,'” declared a grizzled old marine sergeant, swelling with pride when he heard the new title.”

The German origin story for “Devil Dogs”, or “Teufelhunde”, has been debunked, not least by H. L. Mencken as this site relates;

In The American Language (1921) Mencken comments on the Teufelshunde term in a footnote: “This is army slang, but promises to survive. The Germans, during the war, had no opprobrious nicknames for their foes. The French were usually simply die Franzosen, the English were die Engländer, and so on, even when most violently abused. Even der Yankee was rare. Teufelhunde (devil-dogs), for the American marines, was invented by an American correspondent; the Germans never used it.“

I think he’s right. Despite a shared cultural history, snappy epithets were not in the German lexicon. They did not even typically differentiate between soldiers of the British nations, using “Englander” as a catch-all. Now, note in the header of original article the anonymous attribution to a “German writer”, and the generally vague nature of the full story. Similar media (in fact, New York Times!) origins can be argued for the other main nickname of this type in the Great War; the French “Blue Devils“. The same anecdotal quality is reflected not just in the paper, but in all mentions of the “Ladies” idea, right down to this recent US attribution that claims it’s a translation from the German. It’s always “as the Germans/Boche/Hun call them”, and never with reference to a German source or anecdote featuring one. To me, this suggests that the press were happy to plant the seeds of catchy new PR-friendly anti-German ideas in the minds of servicemen and those at home. Word of mouth as well as newsprint, would assure the meme a place in history, and victory over the Germans would make its origin unquestionable. The “noble savage” view of the Scottish Highland soldier in other media of the day was certainly bolstered by this idea.

I’d just like to touch again on the possibility of an organic military origin. It’s possible that other units, eyeing the “kilties” with a mixture of awe and amusement, might have conferred the nickname first, with the papers picking it up later and changing the origin for effect. The Indianapolis Star (not free unfortunately) for Wednesday 27th of March 1918 tells us that;

“‘Ladies From Hell’ is the cheerful name given to Scotch soldiers in kilts by their associates at the front”.

Bearing in mind the later date of the piece, this is just as likely to point to a media origin as to the ranks. You be the judge. What we can say is that these three names were almost certainly bestowed by friendlies, not the enemy.

In closing, I’d just like to stress that whatever the source of this classic nickname, this and other military nicknames are not “BS” history. Though by my estimation we are in the realm of tradition and folklore rather than pure history, we can’t have one without the other. The very existence of the name is a fascinating insight into the social history of the Great War and tells us a great deal about concepts of our own military and national identity rather than that of our former enemy. And though these names are not proof of the terrible fighting prowess of the Highlander, the US Marine, or the French Chasseur Alpins, the exploits of those men should, and do, speak for themselves.