Skip to content
bshistorian Exploration, Modern History, Myths, Plausible, Pseudohistory December 24, 2011December 24, 2011 2 Minutes
Perusing the most interesting Lifehacker blog yesterday, I came across mention of a suggestion that pirates’ eye-patches were used to preserve night vision when moving between the deck and interior of a ship. It’s one I’ve heard before, and Wikipedia refers to it in more general, nautical terms. The first listed source is the Encyclopaedia Britannica, though I can’t find any entry entitled ‘Eye Eye Matey’. The redundant section immediately below references the Mythbusters episode where they tried it out, and found it to be plausible enough. As that last link shows though, there is no actual historical precedent for the idea.

This led me to consider where the pirate/eye-patch thing did in fact come from.

Here I will direct readers to the rather good Athenaeum Electronica blog, which has covered this very issue in some detail. I broadly agree with their concluson that our modern and specific association with pirates most likely originates with the classic 1950 movie version of ‘Treasure Island’, as depictions of patched-up pirates are few and far between prior to that.

However, I think there’s more to it than that, something that the great post linked above has missed by limiting his research to pirates specifically. The one-eyed, peg-legged sailor is actually an older trope, used to imply the rough and dangerous life of a naval seaman or officer; see the early C19th cartoon reproduced here, this 1851 fictional description of veterans at the Greenwich Hospital (complete with ‘iron hooks’!), or this 1828-dated fictional use of a ‘factitious leg and black eye patch’. Whilst these injuries may not have been as ubiquitous in reality as the stereotype implied, they would have been fairly common amongst veterans of all services, and sadly are again common today thanks to the Afghan and Iraq wars. And sailors could still find work with a missing eye, as Samuel Johnson’s diary shows. The skillset of a seaman was far more valuable to a ship’s captain than his depth perception. In any case, direct injury wasn’t the only threat to one’s eye; disease too was a serious problem.

I would also note that the line between historical pirates and other sailors was less clear in the past, what with the prize money system and letters of marque. Today’s sailors have nothing in common with their piratical counterparts.

This being so, consider this Punch illustration from 1896: 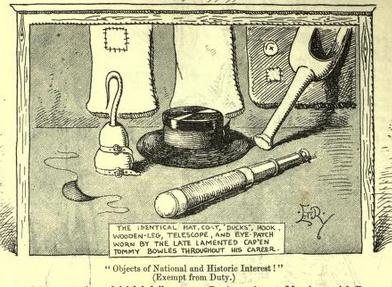 Perhaps it was intended to reference the fairly-recently (1883) published ‘Treasure Island’, but given the inclusion of a sailor’s hat, I have a feeling that it’s really a continuation of the ‘disabled seaman/old sea dog’ trope that’s still going today, independent of (or perhaps interdependent with) things piratical. After all, Robert Louis Stevenson didn’t just create the idea from whole cloth. He designed Long John Silver’s appearance to be familiar to the audience – not necessarily as a pirate, but as a grizzled sailor.

I realise International Talk Like a Pirate Day is a way off, but be sure to include an eye-patch in your Pirate Regalia…